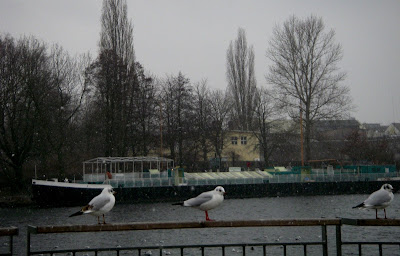 This is the title of a classic Altman film which my Dad used to watch obsessively but which I somehow never saw. I can still hear the dialogue between my parents and my mother asking impatiently “Are you watching that film again?” Important scenes were of course described to me, particularly the bit where Elliott Gould tries to fool his picky cat into eating an inferior kind of food by putting it into another tin (no kitty I’ve ever met would fall for that one!). The title is also somehow appropriate for me because I’ve always dreaded having to say goodbye. When I was a child, I couldn’t bear being sent off to bed and whenever we had visitors, I used to cling to them and tearfully beg them to stay. Of course, things have improved since then but I still get that awful feeling whenever a trip or visit is coming to an end and I know we won’t see each other again for a while. Why is it always Sunday evening? Where did all that time go? Whenever J. comes to visit me in Berlin, he takes the night train from Munich. The nice thing about that is that we can breakfast together and we really do have the whole day ahead of us. The disadvantage though is that he has to return late on Sunday evening. In fact, it’s incredibly difficult after watching a Melville film and eating spaghetti aglio olio where it’s warm and cosy to then set out for the train station when you’re already feeling sleepy.

When J was here in Febraury, it had been snowing steadily all day and the soft new flakes muffled our steps as we made our way to the S-Bahn. We walked down to water’s edge at Wannsee to see its frozen surface and enjoyed those last precious moments together in that silent landscape. Last weekend though couldn’t have been more different. Our two days mainly consisted of cooking, watching films and exploring new areas in Berlin. Yesterday morning we looked at Andreas Feininger’s photos of Manhattan in the 50s and imagined how wonderful it would be to soak up the noise and energy of New York. Afterwards, J. took me to the famous Café Einstein for pear tart and a jug of hot chocolate with lashings of cream. I had often heard about it as it’s one of the oldest cafés in Berlin but was surprised to find it so discreetly tucked away in a quiet street. Unlike most customers we sat inside on the red leather banquettes in a high ceiled room with deep wooden panels, mirrors and low hanging lightshades like globes. Opposite some Spanish people were savouring their étagère brunch of pastries and blueberries with fromage blanc. Late afternoon, we strolled down to my favourite Indian restaurant in Goethestraße for Alu Gobi and Bhatura bread that burns your fingers. 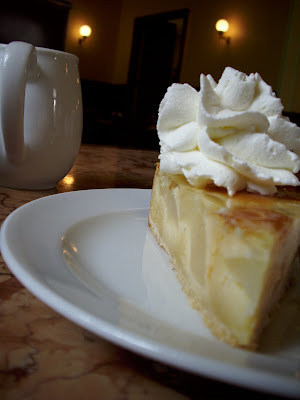 When it was time to leave, the air was still sticky but with a soft breeze and the streetlamps burned like fireflies in the night to guide us. The lake glimmered with the reflections of the boats while further on the horizon, you could still see a lighter patch of sky. Towards the East there were flashes of lightning and we knew that the storm would come soon, even though everything around us made it seem so impossible. I watched J’s train pull off into the night and then was left to journey back alone. The streets seemed so much emptier and the raindrops began to fall.

This morning when I woke up, it was still raining and I knew that the only way to cheer up was to have some serious comfort food. One of my favourite recipes is tarte au citron or lemon tarte. I love its tangy creaminess and light but crisp pastry and it has never failed to lighten my mood, even on the darkest days. Juice and zest of 4 lemons, plus some longer strips

Some icing sugar to decorate 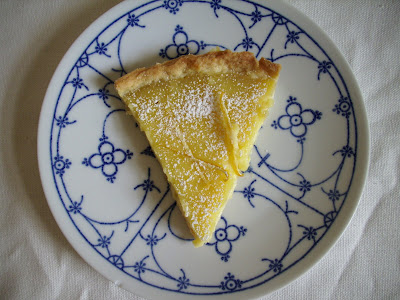