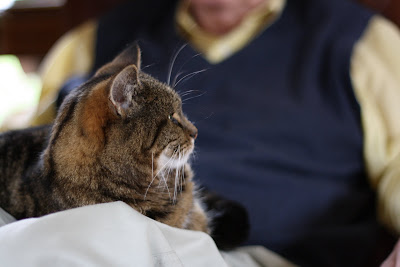 This is not the post I'd wanted to write. On Tuesday, I prepared something with a strawberry tiramisu recipe but was exhausted from the heatwave in Berlin these past few days. Thank you so much for all your lovely comments; I promise to reply to them soon. Yesterday I arrived in the UK but one of the cats, Jemima was seriously ill with a tumour. She had an operation to remove a growth around 6 weeks ago and seemed to be doing so well but the cancer returned. I feel glad that she hung on until today so I could see her again. I had never seen anybody die before but she slipped away peacefully after the injection and still looked so beautiful when we buried her under the apple tree just now, scattering flowers and leaves over her head. The house seems terribly empty without her, already I keep expecting to see her rushing in through the catflap. We shared so much and I'm now trying to remember everything before those wonderful memories fade as everything does.

I still remember the woman at the animal shelter telling us that you were bad tempered at first because you had a thorn in your ear after somebody had abandoned you in a hedge but from the minute you arrived, it was a joy to have you with us.

I love the crazy way you used to shred newspapers and walk across the banisters like a tightrope artist. We used to say you were perpetual motion because you never stopped moving. I love your craze for water and also for smelly feet which made you bite our ankles until we took off our shoes.

I love the way you held your own as the only girl with the boys. The way we used to guess who would be in first at tea and breakfast time and it was always you.

I love those friendly little growls you gave when we had to put you out of the kitchen.

The way you always tried to climb into my Dad's cereal bowl and get his toast and marmelade.

The way that you came to me last night and stayed on my knee for hours as we watched the Squid and Whale together. Life won't be the same without you little one. I miss you so much, even if I feel you all around me still.

Apologies for typos dear readers but I can't face proofreading so forgive me. Tomorrow I'll leave for the Scottish borders, seeing the sea again with its infinite mass of blue. I'm glad of some time to reflect. 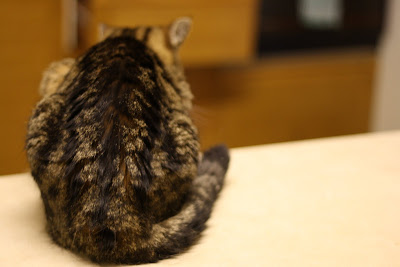