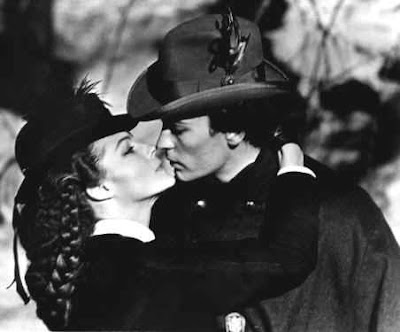 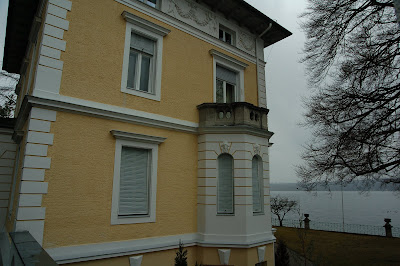 Last weekend I was in Munich. Most of the time was spent being lazy and watching films but J.also persuaded me to venture outside a bit. We took a trip to nearby Lake Starnberg yesterday morning on one of those grey, dreary days I rather like. I had only been there once before in 2007 on a rather warm afternoon and actually, I liked it more this time around. There were just a few well-dressed elderly couples wearing elegant hats or joggers and the whole area seems fairly forgotten and melancholy out of season. Pebble beaches where the waves of cold emerald water break with just a thin line of spray, shiny wet surfaces of ping pong tables without nets and volleyball courts littered with dead branches and leaves. If you walk along the left side, you come to a memorial for mad King Ludwig with a cross in the water where he was mysteriously found drowned. It's a bit of an eyesore but made me think of Visconti's long and wonderful film about him with Helmut Berger and Romy Schneider taking up the role of Empress "Sisi" again but this time with more depth. It's so fascinating to see how he squanders his power as a young and beautiful ruler pursuing his crazy dreams of building castles in the sky and running up enormous debts for lavish Wagner operas until we witness his final sad decline alone and exiled. Though he was unquestionably erratic, there's something so poignant about his huge scale artistic plans which seemed doomed from the beginning. You won't find a sense of that with the memorial but on days like yesterday at the lakeside it's possible to picture the emptiness of his final years. 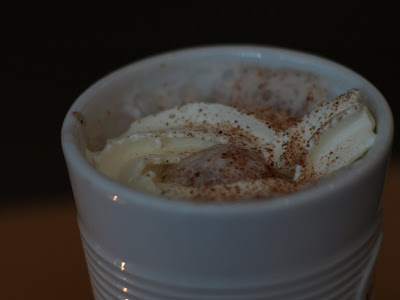 We wandered a little further to a small place along the shore called Leoni to savour a hot chocolate in one of the hotel spas. It was rather a strange mix of poshness and kitsch and we found ourselves in the cocktail bar watching the other guests drift back and forth from the breakfast room and the patterns of the raindrops against the glass. Hot chocolate has always been a special drink for me. It always makes me think of Angélina's in Paris or the Café Savoy in Prague, two of the most wonderful cafés I've ever been to with their excessively thick and rich chocolate drink. Often I simply make mine at home with milk, cocoa and honey but espcially if I feel down, a real hot chocolate brings me instant comfort. At the end of our walk I felt sad to leave without really being able to explain why. Maybe because I felt these moments I had so enjoyed were already gone forever, melting into just another series of Sunday mornings.
Publié par Emily à 11:01