The art of slowness 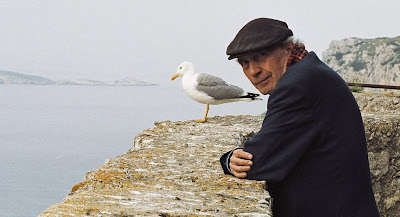 Sometimes I think the defining feature of modern society is speed. In many ways it's a good thing; we can travel to far flung destinations in a matter of hours rather than days or weeks; we have a mass of information at the click of a button and appliances like washing machines and dishwashers leave us longer to get on with things we like. The downside however, is that we're often too impatient for things to come our way and feel the need to constantly multi-task.
Recently someone I know told me he'd started reading Proust which I was glad to hear as so many people are put off by the idea of tackling such a huge book. He complained though about the amount of concentration necessary and that it was simply impossible to read fast. This though is surely what Proust must have had in mind when he wrote his non-stop, meandering sentences with such complicated syntax and language. He wanted us to slow down and savour the poetry and musicality of his words. How can we reflect on our past, on time or on the taste of a madeleine if we're rushing? I've been reading Proust for quite a long time (almost 8 years) and there are moments when I also feel frustrated because I'm too tired to read him in the U-Bahn on my way to work or it's impossible to read more than 15 pages at a time but overall, I love dipping into the world his books which is so rich and unique and know it's worth the extra effort.
Another French genius who has mastered what I would call the art of slowness is film director Jacques Rivette (above). Along with François Truffaut, Jean Luc Godard, Eric Rohmer and Claude Chabrol, Rivette started off as one of the writers for the influencial film magazine Cahiers de Cinéma before becoming a director himself and was associated with the New Wave. Perhaps the most striking features of his films are their versatility but also their length. They range from 2 !/2 to almost 4 hours which certainly place demands on the viewer and probably explains why he isn't constantly top at the box office. One of his films which I like the most is his first called Paris nous appartient (Paris belongs to us) about a group of young people in Paris during the Cold War period when paranoia and fear filled the air. Though more than two hours long, I found myself transfixed by the complex relationships and backgrounds of the characters. The photography by Charles Bitsch is amazingly beautiful and there's also an interesting musique concrète soundtrack which makes everything seem so threatening. Rivette took over two years to make it, by which time it got unfairly overlooked by films like Truffaut's 400 Coups and Godard's A Bout de Souffle as leaders of the New Wave. What a shame as it's so beautiful and certainly a masterpeice.
Of course, Rivette and Proust aren't everyone's cup of tea and I certainly wouldn't hold it against you if you preferred something a bit more fast moving but isn't it nice to go slower sometimes?
With food, preparing and eating fast have become major issues. Arriving home tired and hungry from work, we no longer wish to spend hours slaving over a hot stove. Sometimes this can mean sacrificing quality for instance with a frozen pizza or a microwave meal. I've done that too but must say, I never feel good afterwards and always wish I'd spent 10 more minutes preparing something nicer. Luckily there are some great cookbooks now like Nigella Express and Nigel Slater's 30- Minute Cook which make it possible to have something tasty with the minimum of fuss. At weekends though, I often like to spend longer preparing something
a bit more demanding, as a kind of treat I suppose. What better place to spend a few hours than the kitchen with its wamth and cosiness? One of my favourite dishes is lasagne. Usually I make it with roasted vegetables but on Sunday I tried a version with spinach which was rich and comforting. Its creator, the wonderful Delia Smith, assures us it's 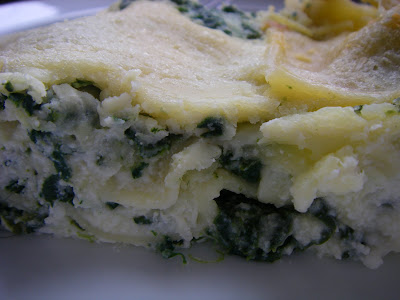 suitable even for spinach haters. As I'm not one myself, I can't guarantee that but feel free to adapt the recipes below with the things you like best.
Spinach lasagne
For the sauce
850ml milk
50g butter
50g flour
1 heaped teaspoon cornflour
60g freshly grated Parmasan
For the lasagne
600g fresh spinach
1 tub ricotta
12 lasagne sheets (the kind you don't need to pre-cook)
A little butter
200g blue cheese (Gorgonzola or Roquefort are good)
1 pack Mozzarella
Salt and pepper so season
Pre-heat the oven to 180°
1. To make the sauce, put all ingredients in a metal saucepan over a medium heat. Stir constantly with a balloon whisk until thick. Stir in 50g of the Parmasan. Remove from heat and cover with clingfilm so a skin doesn't form.
2. Wash the spinach very thoroughly two or three time. Put the butter at the bottom of a large saucepan and then place the spinach on top. Cover and cook on a medium heat for around 2 mins.The spinach will go down a lot. Drain and leave to cool.
3. Squeeze as much liquid out of the cooked spinach as possible. Chop finely on a cutting board and mix in a bowl with the ricotta and approximately 150ml of the sauce. Then crumble in the blue cheese and season with salt and pepper.
4. Grease a dish and begin by pouring in a layer of sauce, followed by a layer of spinach mixture, then lasagne sheets (break if needed so they fit) and finally some Mozzarella. Repeat again and finish with a layer of pasta and finally the sauce. Sprinkle with the remaining Parmasan and place in the oven for abouut 50-60 mins. When it's re
ady, leave to cool for a few minutes as it's very hot. Bon appétit! 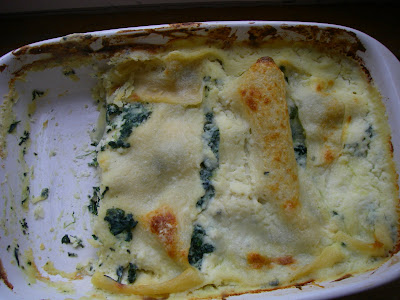 I'm also including the roasted vegetable variation. I've made this for many people but espcially for L. from California for her birthday last year. We enjoyed it so much that we ended up eating it cold at breakfast next morning before heading off to Potsdam. I miss her warmth and and sense of fun in Berlin. This lasagne needs a bit more time but then you know the best things come to those who wait and it's truly scrumptious.
For the sauce:
850ml milk
50g butter
50g flour
1 heaped teaspoon cornflour
1 tub ricotta
For the lasagne
1 medium aubergine
2 small courgettes
450g cherry tomatoes
1 red pepper, deseeded and diced
1 onion, finely sliced
1 clove garlic
3 tbsp extra virgin olive oil
1 pack Mozzarella
12 lasgne sheets (the kind you don't need to pre-cook)
A little grated Parmasan
1. Prepare the aubergine and courgettes beforehand by cutting them into 1 inch (2.5 cm) dice, leaving the skins on. Then toss the dice in about a level dessertspoon of salt and put them into a colander with a plate on top and a heavy weight on top of the plate. Leave them on one side for about an hour to get rid of the bitter juices. After that, squeeze out any liquid left, and dry the dice thoroughly in a clean cloth.
2. Place all vegetables in roasting tin and sprinkle the oil and garlic over them. Then cook in the oven at 200 ° for about 40 mins or until they start to look brown.
3. Make the sauce by putting all ingredients except the ricotta into a metal pan and stirring with a balloon whisk over a medium to low heat until thick. Then add the ricotta and mix until smooth.
4. Remove the vegetables when they're done and turn the oven down to 180°. In a dish, begin by pouring a layer of the sauce, followed by some of the vegetables, the mozzarella and lasagne sheets (break if needed so they fit). Repeat and finish with the pasta and finally the sauce. Sprinkle the Parmasan on top and bake for about an hour.
Publié par Emily à 11:10