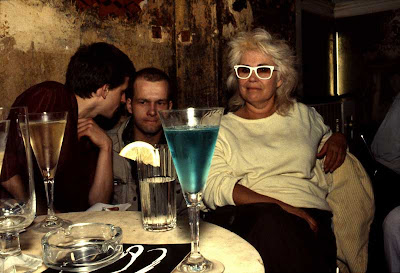 Photo: http://www.tip-berlin.de/kultur-und-freizeit-kunst-und-museen/nan-goldins-berlin-work-teil-zwei
In the corner of a bar in Kreuzberg, a woman with white blonde hair sits back in her chair, the faintest of smiles on her lips as her friend takes a picture. In spite of the dim lights, she is wearing tinted glasses in thick plastic white frames to match her pullover. The waiter has just set a large glass of some exotic cocktail on the table whose blue colour contrasts perfectly with the surroundings and the roughness of the bare walls. Next to her, a young gay couple whisper sweet nothings to each other, oblivious of her presence. Did they strike up a conversation that evening? The ashtray is still empty and the drinks haven't yet been touched so perhaps the night is young. This could be New York in the 70s with its party scene and wild nights but instead it's the O-Bar or Oranienbar where gender boundries blur and new encounters are made. In another city, Bea might look out of place but here, nobody even bats an eyelid. I like to imagine her as a faded disco queen who once hung out with Warhol at studio 54. The Berlin of the 90s is a refuge, a city finding its identity after being isolated for so long and both she and the photographer, Nan Goldin feel at home. A photograph is all that remains of a moment, something to remind us how we were feeling that day or how the light was. Nan Goldin says she started taking pictures so that she never had to lose anybody again but today the pictures only remind her of what she's lost after many of her friends died of AIDS or drug overdoses. I remember going downstairs and coming in on part of a conversation between my mother and my aunt in the USA where my mother had to tell her that my grandmother had died. I wasn't supposed to find out that way and ran to the living room where we kept the boxes of slides. In the slideviewer, I looked at a recent one taken of my grandmother and wondered how a person can be so alive and then gone, that it seemed cruel that all that remained of someone's face was set in a small plastic frame or printed on a piece of paper.
Yet I still love taking photos because it makes me notice the little things or go out and explore, because I can always get better and ultimately, it's the only thing I have to remember the reflection on the water or the shade of red of a person's coat.
January has never been my favourite month, Christmas makes it easier to accept the cold wind and darkness at 4pm but I'm missing the lights and fun of the holidays. Perhaps the best thing is just to accept that sometimes I get the blues or the "mean reds" as Holly Golightly would say. I'd like to find my own equivalent of Tiffany's, a place that always made you feel safe. I guess the closest I can come to that is with the books and films that fill my apartment. My brother gave me Edmund De Waal's The Hare With Amber Eyes for Christmas, a book I'd been curious to read for a long time. It first caught my eye while flicking through a copy of the New York Review Of Books somebody had left in the teachers' room. At first I thought it was simply about one of the real life models for Proust's Charles Swann, a collector called Charles Ephrussi but actually, it's much more that that, a memoir of the objects the author inherited called netsuke and their journey back through his family history via Paris, Vienna, Tunbridge Wells and Japan. It's a truly magical book filled with images from the Belle Epoque, the craze for Japonisme, Manet sending a painting of a single asparagus, the facades of the Ringstraße in Vienna with the Emporer driving past in his carriage and a black gloved hand waving to the children, the terror of the Nazis breaking down the door and a journey to Japan in ruins. It's a truly wonderful book, one which I'll be sad to finish. When I feel too tired for the netsuke, I pick up Sam Wasson's Fifth Avenue, 5am about Audrey Hepburn and the making of Breakfast At Tiffany's. It's the kind of book you could wolf down in one sitting but I try to take my time, imagining that period when New York was dazzling and full of glamour, dreaming of little black dresses and cocktails with Truman Capote. The caption reads: who's going to pay for that? Another cure for the blues is spending time in my kitchen, enjoying the first rays of sun and the pink and orange splendour of the sunsets. I feel a need for pizza on Friday with a film noir and a pudding on Sunday afternoon. When I was little, my father used to make his own marmelade and large pot bubbled away on the stove before sifting away the skin and pips and hearing the whizz of the blender. Once he even forgot to put the lid on , covering everything with orange peel but never mind. Anything with marmelade makes me feel nostalgic and when I saw this pudding recipe with it in Nigella Lawson's new book Kitchen, I knew I had to make it soon. It's amazingly easy and everywhere smells of oranges and butter which is comforting on a day when thick grey clouds haven't let through a single ray of sunshine. I'm going to curl up on the sofa to watch I Capture the Castle and hope you have a good Sunday. My Paddington, another Christmas present